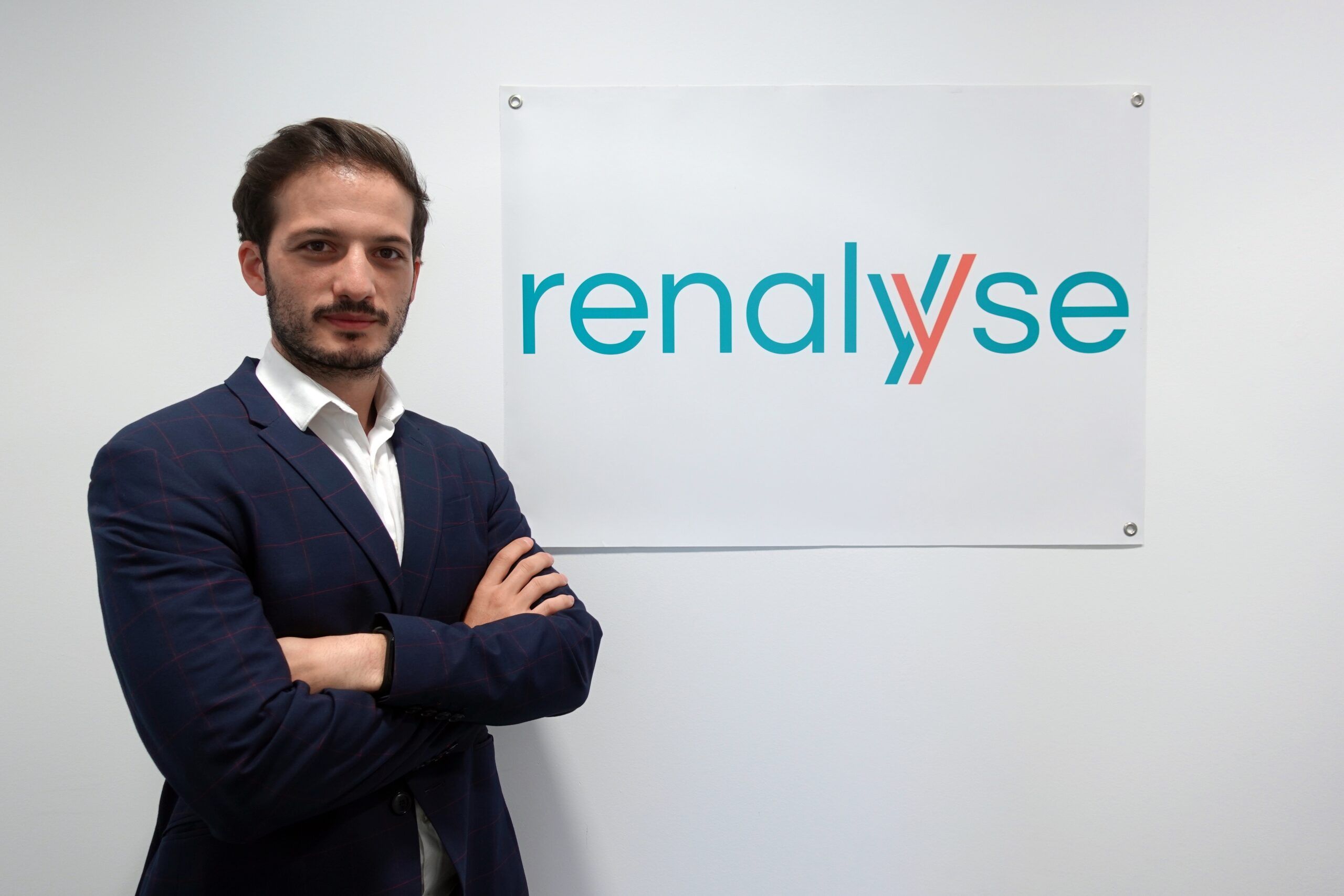 Adrià Maceira: “We provide solutions that, through the analysis of biomarkers, warn of an imminent health risk”.

Renalyse was born as a concept in the company of CreatSens Health S.L., a spin-off of the Rovira i Virgili University (URV) in Tarragona, founded in September 2017. The start-up works to improve the treatment of diseases such as chronic kidney disease. By providing diagnostic tools, it helps the health system to better manage the information generated in primary care centers, medical consultations or nursing. At the same time, it seeks to empower patients in the care of their pathology.
We talked to its CEO, Adrià Maceira.

How did the idea for Renalyse project come about?

That was six years ago. I was already doing research and the main problem was that everything was always in a research report, commonly called a “paper”. Science is far from the market, so it is difficult to make it a reality, at least in the short term. And that was my real concern: looking for a technology that could bring it to market and make sense. The project was not out of necessity, but the other way around: we had a better technology than the current one and we wanted to find where it would really make sense to use it. After several attempts, called “pivoting” in the startup world, we come to a device to measure creatinine / potassium / hemoglobin / lithium in a single drop of blood. This makes a lot of sense for patients with kidney and bipolar disorder, and we are developing a business plan.

Why is there more thinking about solutions that empower the patient and at the same time release pressure on the healthcare service?

The pandemic has helped a lot. But that comes with the advent of easy-to-use new technologies. Some time ago, I worked for another company in China, where the number of people makes it impossible for paramedics to take care of them all personally. There is no choice, there is an urgent need to solve this tele-assistance system. Europe saw that there could be a part of the solution here and it has been put in place.

When you talk directly to physicians, what is your reception?

Very good. I wouldn’t have told you the same thing six years ago, but now it’s very good. They gain time and peace of mind and can dedicate this time to more complex aspects that do require face-to-face care. And, within the health disciplines, nurses are the first to be willing to try the solution; six years ago and now.

And with patients, how do you react?

Very positive. People is willing to have the tool already. Not long ago, I received an email from an American telling me that he had died for five minutes because of the potassium that caused his heart to stop. They were able to resuscitate him, but now he is anxious not to know if this will happen again. But he told me that if he had our device, he would be quiet because he could control the situation.

I had to tell him I was sorry, but we still needed some steps and certifications to be able to sell the product safely… This makes you feel powerless not to be able to help, but motivates you to do your best to get it complete. There are a lot of people interested. In short, what we offer them is peace of mind. And they all say, “I wish I could have it,” but we’re not in the market yet.

“Having a good intellectual protection strategy for the project allows you to explain it calmly, and that opens the door.” Adrià Maceira

Adrià Maceira, what stage are you in?

We are beginning the certification process in parallel with the clinical trials and the regulatory part. We are talking about a year and a half – being optimistic – to reach the market. We develop both science and product. And science is going much slower. In addition, it needs to be optimized so that it is competitive and therefore it pays to produce it.

Commercialization. Another obstacle. You need to have the capital to have a team that can do this job, marketing, distribution… And that’s not easy. More than 70% of the money you use for the project is for personal. You have to go to conferences everywhere to show the product to doctors, patients, nurses, and so on. And in the end, the decision: What do you do? You try to raise 20-30 million, you produce and assemble a commercial team directly with what that means; or do you go to a pharmacy where everything is faster but still long and can still cause you to die before you hit the market? That said, if you pass the certification barrier, you have the strength to go out and market very powerfully.

And when it comes time to manufacture…

Now we make it by hand and everything goes well. The challenge is for big productions to obtain the same or better. Another challenge, exciting, but challenging. Adrià Maceira comments

… In a huge market. With a huge amount of people likely to use your devices and therefore need to be mass-produced.

Exactly. The sensors are relatively simple to produce, but the cost of the device, the coupling of everything and obtain the correct results is what it costs. It is necessary that all the parts, also the physical ones (the carcasses), behave properly and achieve the optimal result.

And in all this, do you think about six years ago when the idea came up? In the process and everything has to fit in perfectly to reach people?

You start thinking about the solution. In science. They’ve told you some of the things you’ll find, but go ahead… Sure when we get to marketing we’ll look back, but until you get there… At first, think about whether your project makes sense; not in its final design or in large-scale production.

And in the whole process, how has CIMTI helped you?

Especially in the whole regulatory part. CIMTI supported us from the early stages of the project. He advised us on such simple or complicated aspects as “Adrià, if you do it this way on a regular basis now, it will be much easier for you”. And that doesn’t seem like much, maybe three million euros for not having to change the whole project. CIMTI accompanies you and with its collaborators and they tell you “go here because in the future it will be better”. They help you focus on where your problems are, because experience is a degree, and when you don’t, you appreciate it. They point you in the right direction.

And how do you find the CIMTI?

It was recommended to me because we followed the methodology of the Health Innovation Cycle adapted from that of the Boston CIMIT. They have good partners, they are strong in innovation and we thought it was a good idea to let them accompany us. The specific problems we had could be consulted with CIMTI collaborators and that is a lot.

Adrià Maceira insists on the value of having your idea and knowledge recorded:
“I would like to emphasize the role of patents and intellectual property. Entrepreneurs tend to explain too much about our projects. In good faith, open-minded and addictive. But in the health sector, what you do needs to be protected. This interview can be seen by anyone and patent agents are key. Because the value of intellectual property is very high. If you have your projects protected, it allows you to explain them calmly and this opens many doors for you to be able to find those people to whom you explain your project, fall in love with them and give you the final push.”

Besides, you also work in the detection of lithium levels and mental illness…

Because in the end who has bipolar disorder usually has kidney problems due to lithium treatment. We usually put projects together because they are already mixed up. Who suffers according to what is also a consequence of another affectation and this is where we customize the solutions. Each patient will be able to have a device adapted to their needs according to their condition. We want to be a platform where there are different biomarkers in a single device that, in a very simple way, through a drop of blood, you can control from home.

And now, Adrià Maceira, what is the goal?

Go to the market to help people and see that you have managed to make patients live more peacefully or that the device has been able to prevent further damage such as a heart attack. Because, in the end, our goal is to benefit someone. Leave a small mark, feel full. And if, along the way, you can create a business, have employees, create jobs, and do business with all of that, that’s great. But there is always a social component to the goal that many entrepreneurs have.

But are entrepreneurs resilient enough?

Uff… too much. Resilience and “nonsense” go hand in hand. You hit your head on the wall many times… but come back the next day. One day you cry and the next you laugh. Beware of contagions on the computer, both positive and negative. Resilience makes it possible for you to rise again and if you are not resilient, you will not get where we are now.

When do you see yourself in the market?

For me, tomorrow! But if we are realistic, this could happen by the end of 2022. COVID has delayed it all by six months…